This millet apple crisp (crumble) is my humble contribution to support the cause of millet-growing, consumption, and awareness!

It’s only been a few weeks since I wrote how baking used to be out of my comfort zone. I had just decided that I was going to bake more. But now it looks like I am not able to stop baking! What started with a bread and butter pudding post was followed by a week of homemade pizza. Then came the week of oven-baked sweet potato chips. I had thought of taking a break from baking, but here I am, writing about another baked dessert!

This apple crisp (or apple crumble depending on which side of the road you drive on) is a classic dessert, but with an “ancient” twist! The twist is, this recipe uses an ancient “grain” – millet instead of oats.

If you are interested in trivia, here is one – millet, always called a grain, is actually a seed! But that alone doesn’t truly change anything, does it? Irrespective of the classification, it is a fantastic crop, and is often called a “super crop”. Millet is an ancient “grain” that was once widely cultivated and consumed in India. They are naturally gluten-free, low in carbohydrates, and high in fibre, calcium and iron. They digest slowly releasing energy for a longer time. Millet needs less water and chemicals to grow, and most varieties thrive in adverse weather conditions. Over the years, they have been overlooked in favour of rice and wheat, and they had slowly started to fade away from our wholesome food experiences. Not anymore!

Karnataka, the highest producer of millets in India, has been urging the Food and Agriculture Organization (FAO is a specialized agency of the United Nations. Look them up at the #ZeroHunger) to declare the year 2018 as ‘International Year of Millets’. This, if it happens, will help spread awareness about millets around the globe.

I thought, let me also try my hand at cooking with millet. I asked my friends for recipe concepts. They gave me a ton of ideas, mostly based on popular millet preparations – savoury dishes like millet pilaf, millet upma, and millet dosa. But this time I was looking for something else. I wanted to experiment using millet in desserts. This millet apple crisp (crumble) recipe is the result of all that research and trials.

Apple crisp or apple crumble is a classic. Most traditional recipes use rolled oats. I used little millet rice, and results were absolutely sumptuous!
Go ahead and give this recipe a try! It is as simple as it can get, but the taste will make you go back for more and more!

A little cheat note – this crisp, like the traditional ones, will pair well with a dollop of ice cream! You know you want it!!

This apple crisp (or apple crumble depending on which side of the road you drive on) is a classic dessert, but with an "ancient" twist! The twist is, this recipe uses an ancient "grain" - millet instead of oats.
Prep Time10 mins
Cook Time30 mins
Total Time50 mins
Course: Dessert
Cuisine: American, English, Global
Servings: 4 people 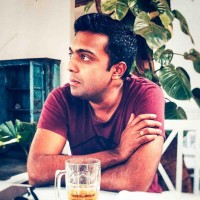